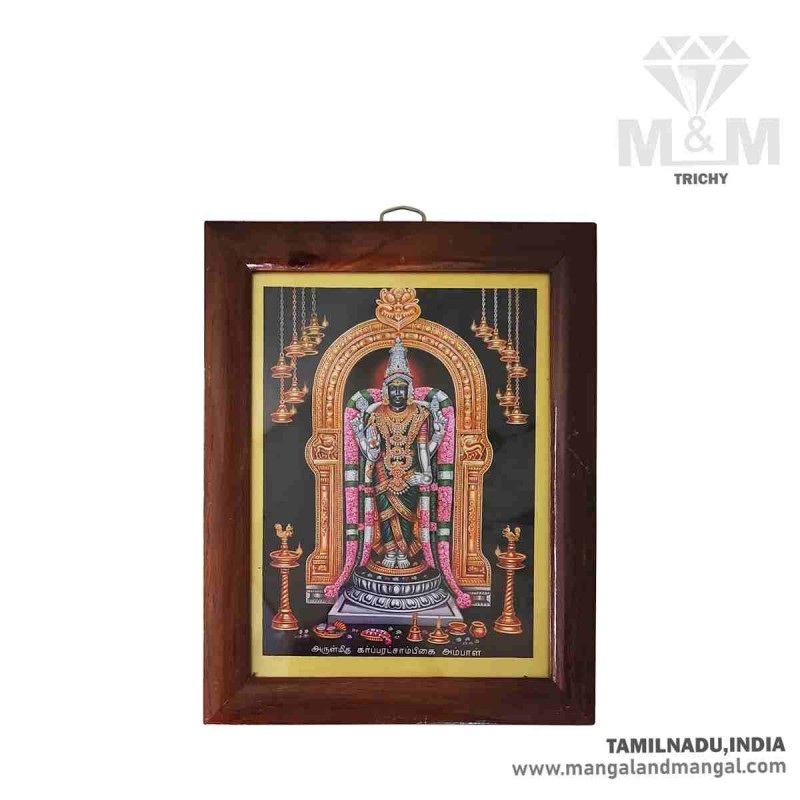 Thirukkarugavur – Garbarakshambigai Temple is on the banks of Vettaru, a tributary of Cauvery.
This is a padal petra sthalam. Lord Shiva is known as Mullaivananathar and His consort is Garbarakshambigai or Karukathanayaki.
This place was a jasmine forest, jasmine in tamil is mullai and hence the name Mullaivananathar.
The Goddess here protects the foetus during pregnancy and hence the name Garbarakshambigai or Karukathanayaki. The Goddess not only protects the foetus but also blesses the childless with progeny.

Pregnant women come here to pray to be free from pregnancy related problems and for easy delivery. The Shiva lingam is a Swayambhu or self manifested lingam. When you visit the temple make a request to the priest to show the deeparardhanai and you can see the marks of the jasmine creeper on the lingam. Vinayakar and Nandhi are also Swayambhu in this temple. Generally the Navagrahas are Vakramurthys or in other words they face different directions. Here the other eight planets face the Sun.

The story of a childless couple Nithiruvar and Vedhigai is connected with temple here. The couple was longing for a child and they set out on a pilgrimage seeking divine intervention in having their desire fulfilled. They visited a lot Shiva temples before finally reaching Thirukarugavur or Mullaivanam as it was known then. Here, Vedhigai realised that she was pregnant. The couple were overwhelmed with joy and believed that it was due to the blessings of Mullaivananathar.

The couple decided to stay back at this place. On a particularly hot summer day, Vedhigai was resting when Sage Oorthuvapadhar came to their place. Vedhigai in her state of exhaustion failed to take notice of the Sage. The principle of “Athithi Devo Bhava” was practiced to the letter in those days. The sage was angry with Vedhigai for being inhospitable towards the guest. In his anger he cursed that her pregnancy would be terminated as that was the reason for her “indifferent behaviour”.

The couple was aghast at the misfortune that had befallen them and prayed to Goddess Parvathi. The Goddess then blessed them by safeguarding the foetus in a pot for the remainder of the pregnancy period.  At the end of it, She handed over a healthy child to the overjoyed couple. The tank opposite to the temple is supposed to have been dug by Kamadhenu. This was to provide milk to the child.  This tank is known as Ksheera Kundam. Thus the Goddess then came to be known as Garbarakshambiga or Karukathanayaki. This place came to be known as Thirukarugavur or the place where the foetus is protected. The local villagers say that there has been no pregnancy related death of the mother or the child from time immemorial. None whatsoever has had a miscarriage or any other pregnancy related problem in this village.

Couples seeking progeny buy the ghee sold in temple and hand it over to the priest. The priest duly recites the necessary mantras and places the ghee at the feet of the Goddess before returning the same to the couple. The instruction given by the priest is to be followed and the couple should eat a little of this Ghee every night for 48 days.  It is believed that not very long after this 48 day period, the woman conceives. This is a belief that is backed up by the experience of many.  Similarly, pregnant women are given oil as prasadam which they apply on their abdomen during the pregnancy. One can see a lot of couples seeking the blessing of the Goddess and an equal number of them on a thanks-giving visit. Worshiping at this temple also removes marriage obstacles.Punugu Abhishegam (Ablution) to Mullaivananathar is believed to cure incurable and chronic illness. Since the Lingam is a SwayamBhu Lingam no other abhishegam is done to the Lingam.

Thirukkarugavur – Garbarakshambigai Temple is one of the five temples which collectively make the Pancha Aranya Sthalams. Aranya means forest and this is one of the five temples that were found amongst the forest. The other four are Haridwaramangalam and Thirukollambudhoor. If one worships at these five temples on the same day, in the above mentioned order, he is absolved of all his sins and there will be no rebirth. Thirukkarukavur is the first temple to be visited early in the morning, between 5:30 and 6AM.

On the full moon day of the tamil month of Panguni (March-April) moon’s rays falls on the Shiva Lingam.

Did you know that we ship to over 24 different countries